An updated room tour for you in a video!  I got the card rack, which is actually a vintage skirt hanger from In With the Old's Etsy shop. My room is inspired by my love for all things vintage and retro as well as my modern life. Hope you enjoy! I am so excited the video uploaded alright. Sorry about the the shaky hand though. I am not the best person at making videos, but hey it works.

All I Want To Do by Ginny Owens

I heard this song on my Pandora Kari Jobe station last night and it just said exactly how I felt. All I want to do is give my life to Christ! I want it all to be for His glory and I want it to be for Him that I am living on this earth.
Posted by Rebecca Ann at 9:30 AM 0 comments
Labels: God, music, thoughts, videos

Save the Nuba people!

If you get a chance please sign the petition!
Posted by Rebecca Ann at 10:49 AM 0 comments
Labels: a higher calling, missions, thoughts

Womens Suffrage- Did it help or did it kill??

Yes I know this is a pretty touchy topic, but I saw this video about women's suffrage and I wanted to share my opinion on it.

I believe that women should have the right to own property, vote, and be able to drive a car or go places unchaperoned. But I do not believe women should act like men or wish to be like men. Yes I do wear pants and I am wearing jeans right now, but I believe women should delight in being women. Whenever I dress in jeans I dress like a lady with feminine accessories and blouses and I do not flaunt my body by wearing them too tight. But that is another day to discuss my wardrobe choices. :)

Women rising up at the beginning and even before the 20th century saying they had no rights makes me cringe and at the same time I am glad it happened. But I am even more so sad it happened and that women now do not appreciate their role as women to be a helpmate to their husbands and delight in their role as women. Biblically women do have leadership roles, but our role is different from men. We are to teach other women and children how to serve God with all our hearts, souls, minds, and strength. We are to give biblical counsel and advice to our husbands and help them. So we are leaders just leading in a different way from men; but God says men should lead in the church, government, and other public venues. This is not because women are not capable but because we are fallen. Eve's curse was that she would want to rule over Adam and she would want to be like God; in charge of it all.

See Genesis 3,"   To the woman he said,
“I will surely multiply your pain in childbearing;
in pain you shall bring forth children.
Your desire shall be for your husband,
and he shall rule over you.”(Genesis 3:16 ESV)

Eve desired to rule over her husband, but it is the men who are in charge after God, not us and I am ok with that. But that does not mean if a man is doing something against what God says we should not stand up against that! Women should rise up against unbiblical leadership!

But we are not to be in charge of it all, God is in charge! I believe this has been the downfall of each culture in the world, especially America, women are sinners and want to be leaders in an unbiblical way instead of rejoicing in their God given leadership roles as wives, mothers, sisters to their families and friends.

I also believe because of women's desire for power and being like men we have killed many generations! Without the women's suffrage movement so many children would not have been killed or orphaned by their mothers and fathers. This is my opinion, sin is the culprit, not one sex or the other for the murder of so many generations.

Yes all of you out there who disagree with me go ahead and state your opinions too! I want to hear what your thoughts are, but please do so in a kind manner.

These are my thoughts on the state of mens and womens roles in our culture today. I believe it all is not just woman's fault; its men and women who are sinners and it takes two to tango. :) Men and women please take a stand for biblical manhood and womanhood.

I know I have been pretty absent from this blog for a while. I have said I wanted this blog to be centered on what the Lord is doing in my life. But I think these pictures are too pretty not to share. Some friends and I want to go to the Renaissance Fair in the fall and I want to sew up a medieval gown for it. I have been watching the TV series called Merlin on netflix and have gotten quite a lot of inspiration from the character Morgana in the series. Here are some of her lovely gowns! They are so beautiful and I want mine to look similar in some ways.

Of course my favorite gown Morgana wears is the blue and purple one above! I love the sheer sleeves and gold trim. 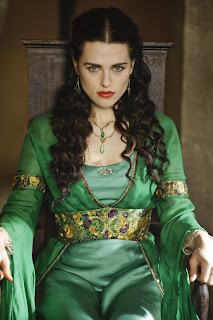 I think what I love a lot about her gowns is all the trims! I want to find some braided or beaded trim to put on my gown or maybe embroider with some shimmery thread some sort of pattern on the sleeves, hem, and neck line of my gown. This is all ideas and I really have not even thought it through that much. I do have fabric, it is wool cranberry red crepe that I got on a great sale from fabric.com. Hopefully it will be nice and cool/warm for september/october weather.

Yeah I know she looks sort of scary in the picture above, but we are looking at the dress not her expression. ;) 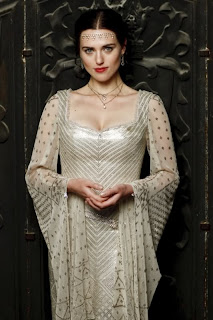 I think the cream gown above is so pretty! The bodice is so neat with the v shaped tucks! 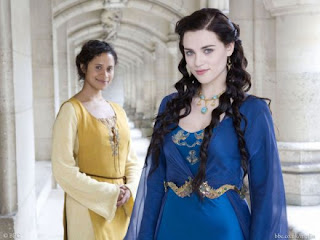 My first inspiration for the embroidery on my gown came from the website Medieval Clothier and this dress from the  below. 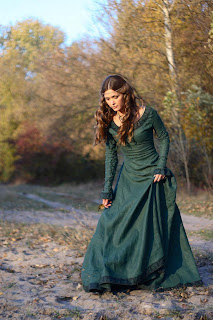 So I have been doing a lot of music practicing for my vocal and piano exams coming up in May as well as a theory examination. So prayers are appreciated and that is one reason I have not been blogging much. No song writing or sewing has been happening lately. Lots of crocheting, music practicing, and planning for a music gig I have coming up. I am so excited as its my first time playing at an outdoor event. I now have a Yamaha Arius I got for my birthday to bring to the event to play on, so thats exciting. I will post pictures of my new room make over and the keyboard soon.

Christ is Risen we are free!

Praise the Lord on this Resurrection Sunday that He died for the joy set before Him and endured the cross despising the shame and set us free by taking the punishment for our sin!

God bless you all! Trust in the Lord and He will sustain you!
In Christ,
Rebecca
Posted by Rebecca Ann at 3:33 PM 1 comments
Labels: God, music, thankfulness, videos
Newer Posts Older Posts Home
Subscribe to: Posts (Atom)

Rebecca Ann
I am a homeschool graduate saved by grace by my Savior Jesus Christ. Through this blog I pray that the Lord would be glorified and many people would turn to Him. I like to write about current events, my faith, and my every day life.